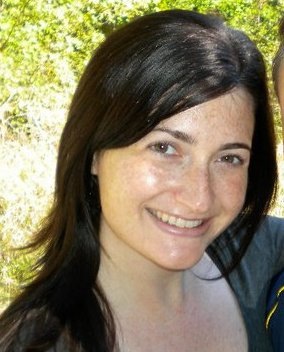 What do you do if you are out of shape and haven’t been on a bike since before your three-year-old was born? You sign up for a three-hour bike ride around the gently rolling hills of Atlanta in the heat of a southern summer. Then you will discover “gently rolling” is code for “I’m gonna die.”

Or maybe it was just me begging for sweet death on every incline. Nonetheless, I survived and beat the urges to jump off and walk the bike, or better yet, lie on the sidewalk until lifted into a motorized vehicle. It was also a crash course in using my gears since I’ve only ridden my bike on the flat, flat and flatter Silver Comet Trail.

Living Walls is an annual conference that started in 2009 and brings artists from Atlanta and all over the world to paint murals on buildings around the city. The Living Walls Tour was the final ride in a week of activities put on by the Atlanta Cycling Festival, with help from the Metro Atlanta Cycling Club.

We were split into two groups — the faster group, whose members donned green bracelets, and the slower group, who donned red bracelets. Mine probably should have been black, like the tags used in triage. But I did make it and it felt like a hell of an accomplishment for someone who isn’t much of a cyclist, and my husband was kind to stay back with me when he could have hung with the greens. By being in  the second group, we also got the pleasure of kicking off our ride by jumping out of the way of a high-speed police chase, the subject of which made the terrible mistake of turning on a small road into a park full of cyclists. He was forced to slow down as we jumped out of the way and gawked at this older man and his passenger and the two APD cars in hot pursuit. This was the route once the excitement was over: 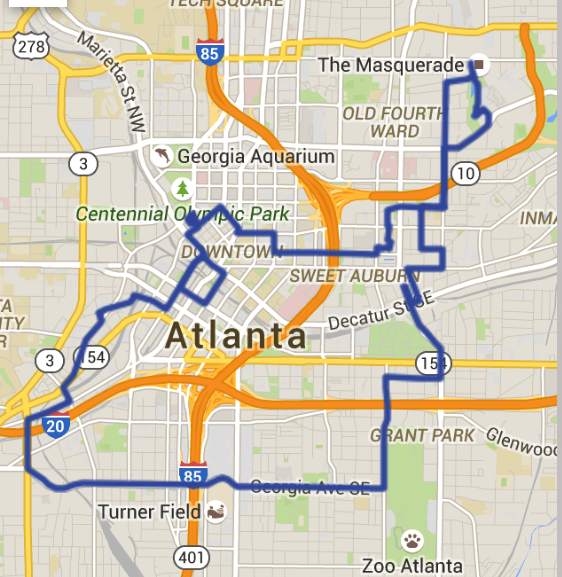 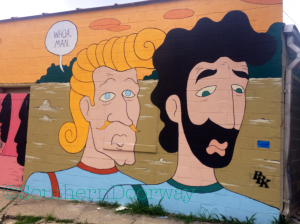 It was a really cool concept for a bike tour of the city. We went through several neighborhoods and downtown. We were able to stop at several of the murals and take photos, though I would have loved a little more time at a few of them. There were a few we only passed by such as my favorite with the alligator by Roa from Belgium (stop 9, though we didn’t actually stop–or maybe that was just those of us who got screwed by a red light). You

can check out the full tour, including ones I was unable to photograph, with photos and artist info here. By the same token, some of the murals we saw aren’t included on the tour list, so if I have not captioned a picture, and you know what artist I should credit, please let me know. Although we had a guide from Living Walls along to share about the different works, lack of oxygen to my brain made it hard to retain the info.

So would I do it again? Yes, but with two caveats. One is that I have to get in better shape. I made it as a mostly non-rider, but it was not an easy course for a beginner. The other is that I think the groups need to be smaller. It could be hard to get going when we were all starting close together and sometimes you couldn’t peddle as needed into the hills.

At any rate, whether you enjoy cycling or not, the walls are worth checking out. This was the second year for the bike tour so I recommend keeping up with The Atlanta Cycling Festival for future rides. 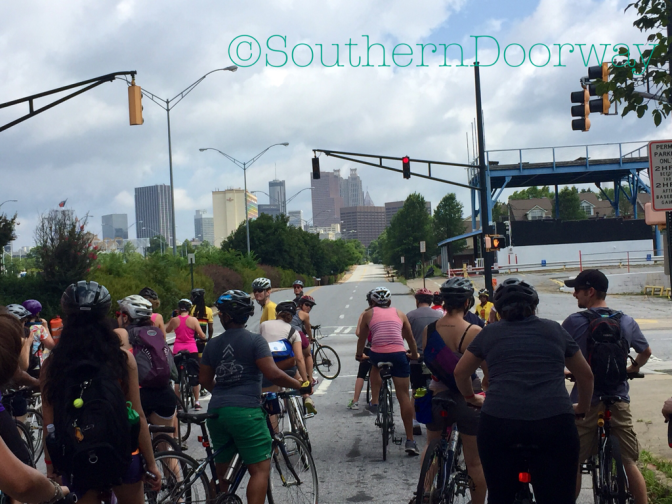 On a side note, at the end the riders were given Chloe’s Soft Serve Fruit Pops. If anyone knows where I can get these in Atlanta, please let me know…cuz yum.

Writer and special needs mom. Go Dawgs! All opinions expressed in my blogs are my own. They do not provide legal or medical advice. View all posts by Rebecca Gaunt